During the summer of 2001, I worked at the Air Liquide corporate offices in Houston, TX, as a lowly intern. Besides sneaking out of work every day at 2:30 pm to go play golf, one of the things I remember most about my first experience in Texas is the way the traffic lights were configured. Weird, I know, but allow me to explain. 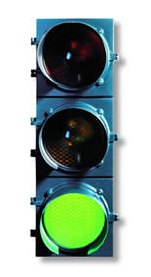 I’ve spent a considerable amount of time in both Louisville, KY, and Atlanta, GA, and the traffic lights work the same in both places. Specifically:

In Texas, however, traffic lights are different, at least in urban markets like Houston and Austin. Instead of vertical lights, the lights are hung horizontally. More important, however, is the fact that the left turn signals go off AFTER the straight traffic has been allowed to proceed through the intersection.

When I first noticed this difference in traffic light configuration back in 2001, I thought about it for a second and decided there was no real advantage to either setup. I just figured that this was how they did things in Texas, because – you know – Texans want to be different.

When I arrived in Austin for this year’s SXSWi and hopped in the rental car, I immediately encountered these silly horizontal traffic lights, and that got me thinking about the subject once again. I hadn’t made a return trip to Texas since 2002, and an interesting thing had happened to me in the meantime.

In 2003, I got in a terrible accident in Atlanta. Basically, a random dude was waiting to take an unprotected left hand turn (without the green turn arrow) across three lanes of traffic at a busy downtown intersection (you’ve seen these people – they try and make their turn after the light has turned red, and they do so because they’re stuck out in the middle of the intersection). I was going straight through the intersection and had gunned it to try and make it through the yellow light. Because of the yellow light, the rest of the straight traffic had begun to stop, and the guy making the unprotected left hand turn decided to sneak across three lanes of traffic because he was blocking the middle of the intersection. I was going about 50 miles an hour, and this guy seemingly popped up out of nowhere and was now directly in front of my car. With a stab of the brakes, a miracle, and some good slalom driving, I managed to guide the car through a sea of street signs, traffic poles, telephone poles, and store marquees, and I only hit a tension wire that was attached to a telephone pole. I walked away from the crash without so much as a scratch. My car was totaled.

So, fast forward to Austin in 2006, and I’m sitting here looking at these silly horizontal traffic lights, waiting for my left arrow to turn green so I could get rolling. Of course, this got me thinking, “Why the hell do the turn arrows go AFTER the straight green lights?”

Then it hit me.

SAFETY! With engineering and logistics, the most common reason for an otherwise inexplicable method of operation is a safety underpinning, and I believe this is precisely why the Texas traffic lights are configured thusly.

Think about it: if the turn arrow is the last to go, then people aren’t going to be planted out in the middle of the intersection waiting for their chance to gun it across three lanes of traffic, just so they won’t have to wait through another light cycle. Although I haven’t done any research on the topic, I’ll bet good money that unprotected left hand turns are the number one cause of accidents in typical intersections. People make idiotic decisions in the name of avoiding another light cycle, and gunning it after the light has turned red is pretty tempting in our hustle-and-bustle world.

Given my accident history, I immediately became fascinated with this idea. In fact, I couldn’t go to sleep last night because I was thinking about it so much. If you can get over the fact that I’m a total geek for that, you might actually identify with my thinking here. I could have gotten seriously injured (or worse) that day in Atlanta, and I absolutely believe that my decision-making would have been completely different if the traffic lights there mirrored those in Texas. First of all, circumstances would not have been the same, and second, other people’s driving habits change because of the nature of the system. Everybody is forced to make more rational, sane driving decisions because they aren’t given this opportunity to whip it across traffic in order to make a left hand turn.

In fact, I think it’s so genius that I’d like to see every major US city adopt this traffic light configuration. Not changing is sheer negligence, in my opinion. Kentucky, my home state, runs a program on the TRIMARC signs around Louisville that shows the number of deaths on Kentucky roads each year. Between 2004 and 2005 (the only two years for which I have quick data), there was no progress in this area. I think a logistical change on traffic light configuration would make a significant dent in the number of deaths in Kentucky each year, despite the fact that it’s basically a rural state. In Atlanta, the impact would be far more noticeable, as traffic there is not only more dense, but also more hectic.

I think maybe I need to make a public policy push for this in eastern US markets. I suppose that because it affected me personally, I’m probably more inclined to champion this cause. Regardless, I’m going to see what I can do about this. Safety is important, and accidents are just a pain in the ass!