Starbucks, the Drip of Death, and the Destruction of the Universe 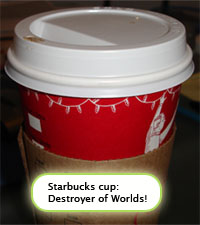 You’ve been there. Got that nice, big cup of coffee first thing in the morning from your local Starbucks. Performed your cathartic coffee-preparation ritual over at the condiment stand. Pissed off the guy behind you because you took too damn long and hogged all the half and half, and now HE’S gotta go have it filled up…you bastard. But who cares about him? You’ve got your cup o’ joe, and now you’re ready to face the day. Now it’s back in your car and on the road…off to work, off to school, off to wherever.

And then it happens.

You feel a little bit of moisture on your index finger. OH, I HOPE MY MIND IS PLAYING TRICKS ON ME. You take a furtive glance down at the hand you’re coddling the cup with. AGH. It’s happening again. The DRIP OF DEATH. 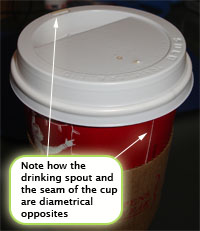 Twenty seconds ago life was good. You got your addiction fix, performed your daily ritual, and felt good about what the day might bring. You even took preventive measures like placing the drinking spout and the seam of the cup in positions that were diametrically opposed to one another. But now none of that matters, because you forgot to pick up napkins. How could you be so shortsighted? Didn’t you EXPECT this to happen? I mean, after all, it’s an international epidemic.

Now look what you’ve done. Your car upholstery is jacked up. Your finger is sticky, and the feeling of friction between your index finger and middle finger is driving you FREAKING NUTS. Didn’t you know that it wouldn’t be so bad if you’d used sugar substitute? Doofus. And just how do you think you’re gonna keep your eyes on the road when you’re insanely worried about where and when the next drip is going to happen? I still can’t believe you forgot the damn napkins.

Is that a drop of coffee on your pants? I think I see some on your jacket, too. Hmm, that’s gonna be a tough one. How much did that cup of coffee end up costing you, anyway? What about the time it took to clean up the mess? What about the anguish you suffered while dealing with your Drip? God help you if you wrecked your car while battling that unpredictably volatile, crappy excuse for a coffee cup.

Let’s look a little closer at this abominable condition, henceforth referred to as the Drip of Death (DOD). Why does it happen? Short answer: crappy cups with faulty seams. Not all seams are created equal. It seems like Starbucks is playing a sadistic game of Jenga with us–sometimes the structure holds, and sometimes it doesn’t. Some seams will hold your coffee; some never had a chance. Some will last 20 minutes, while others will last for hours. Then, of course, you have the ones that bust as soon as you’re settled in your car. Tough luck. 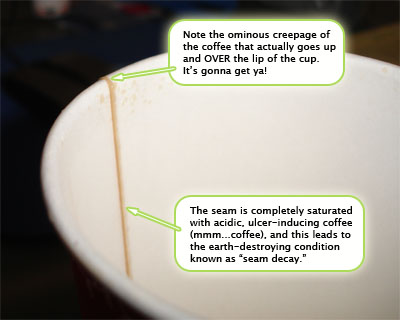 Anatomy of the Seam

While your steaming hot coffee sloshes around, coffee infiltrates the seam region on the cup, saturating it to the point of mushiness. It doesn’t help that you hit every bump, dead opossum, and discarded shoe on the road in your SUV, either. That only accelerates the seepage up and down the seam of the cup. I think it’s Starbucks’ way of civilly (arguable) protesting against your use of an environmentally-oblivious gas hog.

So anyway, you’ve got this ticking time bomb of a cup in your car or your monstrous Hummer H69, and you’re just waiting for this sucker to go off. Better yet, you may be blessed with one of those seams that’s so far gone that the lid pops off the top of the cup. Those tend to be extremely fun at, say, 65 mph. Even better if you’re on a curve.

If that seam gets too moist, especially up near the top of the cup, you’re a goner. Although it sounds like a good thing, too much moisture on the C-spot is the root cause of DOD, and that makes it bad. Very bad. Listen, if you’re faint of heart, I suggest you stop reading now, and whatever you do, don’t look down! The pictures that follow tell the chilling tale of a real-world encounter with DOD. You’ve been warned.

Alright, you sadistic bastard. I knew you’d keep reading. For me, the last straw happened this morning when my tall coffee cup succumbed to C-spot degredation, and the DOD got unleashed all over my car. 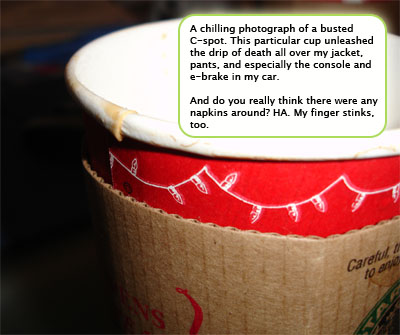 My e-brake was first, followed by my console, and then by my cupholder. Of course, all this occurred after I first felt the DOD on my index finger. At that point, however, I knew it was too late. I also became keenly aware of the fact that I had no napkins…And god help you if you stick your hand down in my cupholder–it may get stuck there alongside a couple of George Washingtons and a handful of honest Abes. 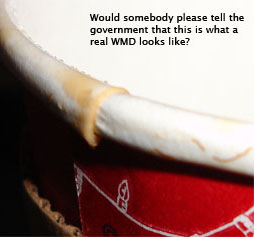 The bottom line here is that something needs to be done about this. Starbucks execs are snickering because they fill up their $23 stainless mugs, all the while getting $0.10 off of each purchase thanks to their attention to the environment. Meanwhile, you’ve got coffee all over everything you own. With that in mind, the campaign to BUILD A BETTER SEAM starts today. Sound the horns.

And remember the damn napkins!