Open Letter to Someone I Should Have Beaten to a Pulp 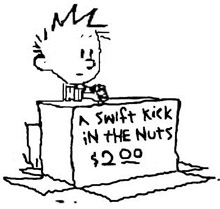 Is there or is there not an unwritten, unspoken code of conduct among mature adults? In my opinion, there are interpersonal boundaries that you simply do not cross, and last night, I witnessed an egregious, almost unbelievable breach of this “code.” Seeing how I’m so absolutely pissed off about what happened, I’m going to write an open letter to the guy who broke the rules.

Dear Guy Who Thought He Was The Poker Champion of the Universe,

I watched you when you sat down at the poker table last night. I saw you roll up the sleeves on your white, button-down shirt, revealing a questionable gold watch. I noticed your spiked hair and designer jeans, and I knew you thought you were hot shit. I was all over it when you looked around at the people seated at the table and then gave a wry smile as if to say, “I’m going to fleece these people.” When you sat down, you flipped your chips around like the guys do on TV, and I could see just how much you wanted to believe you were one of them.

So go ahead. Be a badass.

What is it with you, man? Every time someone would make a call or a raise, you’d roll your eyes like you thought they were idiots! Clearly, you think you’re the authority on every play.

But hey, maybe I just overreacted. Maybe I just passed judgement because I thought everything about you reeked of a prefabricated attempt to mask your underlying insecurities.

You see, when you and my buddy went head to head on the biggest pot of the night, I saw the way you looked at him. I could read your thoughts plain as day: “What does this idiot think he’s doing calling me?” You almost looked offended.

While I’m slightly peeved that you run around passing judgement on people using whatever idiotic criteria suits you, I’m much more upset about the fact that in this case, you couldn’t possibly have been more wrong. My buddy graduated from MIT, and I’m sure you don’t even know what that is. He has every reason in the world to assume that those around him are on a level well below his own, and yet he underestimates no one. On the other hand, you’re over there without a pot to piss in, calling the kettle black at every turn.

And you paid for it.

When my friend won the hand by getting a flush on “the river,” you completely flew off the handle. You cussed him, called him a faggot, and threw your cards across the table in a tantrum that any two year old would admire.

I’m not sure you noticed, but everyone within earshot was shocked. People were looking at each other uncomfortably, wearing expressions that had “are you kidding me?” written all over them.

You told my buddy he was an idiot for playing the hand, even though there were no fewer than 11 cards in the deck that would have allowed him to win. With an $80+ pot on the line, what’s another $8, or even $16 for that matter, when you have a 25% chance of winning?? Doyle Brunson himself would tell you that you have to make that play. Smart guy that he is, my buddy made that play, and he took you to the bank. Looking back, I see that as the universe’s way of ironing out the wrinkles that asswipes like yourself tend to cause.

Don’t tell anyone, but I wanted to hurt you. A free thinking adult who thinks, walks, talks, and acts like you is better off six feet under – or worse – in my opinion.

When I got home last night, I temporarily hated myself for not confronting you directly, despite the fact that my friend handled the situation admirably and with class. Unfortunately, I don’t think words speak to people like you. Judging by the superficiality of your character, I think people like you need clear, obvious reasons to change your behavior.

Like me stepping on your neck and threatening you. Or me crushing some ribs. Or maybe me planting a big right hand solidly in your cheek.

Don’t think that entire room wouldn’t have been behind me, either.

Enjoy your tail-chasing experience in the sub-amateur poker circuits. The fact that you’re destined to fail only makes it that much sweeter for me.

Eff you and the goat you rode in on,