Why You Don’t Mess with Another Man’s Work 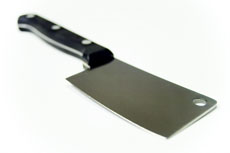 If you’ve been around here for the last month or so, then you probably know I am the architect of the Cutline Theme for WordPress. Also, you might have gotten the notion that I take a lot of pride in my work…

Which is why it should come as no surprise that I would be positively incensed to find out that someone has blatantly ripped off my work (edit: link removed) and passed it off as his own. Sound ridiculous? It gets worse.

Taking someone else’s work, modifying it slightly, and then claiming that you “created” it is stealing.

The guy who ripped off my work is stealing, plain and simple 1. Here’s what he says:

…The theme you’re looking at now is my very own and I actually like it ravenously. That means I’d eat it. I call it Cleanline.

Cleanline? Are you kidding me? To be honest, the first time I read that, I did a double-take. My thoughts?

“Could anyone really be that stupid?” 2

Apparently so, and now I feel the need to explain myself so that others will understand exactly why it’s so terrible to do what this jerk has done.

Where My Passion Meets the Pavement

There are only three “living” projects in which I retain ownership — Pearsonified, Tubetorial, and Cutline. I can say without hesitation that I put everything I have into my production on all of these sites, and the pride that I have in them is merely reflective of the hard work that I have put into them.

I believe so strongly in the project and in the idea of open source development that I made it free to the public (with a Creative Commons Attribution–ShareAlike 2.5 License). On top of that, I continually update the theme and provide ongoing support at the Cutline demo site. The response has been amazing, and I am eternally grateful to everyone who uses the theme and respects what I created.

I am even more grateful to those of you out there who recognize the little details that I pored over at 2 am in an attempt to set Cutline apart from the crowd.

From the bottom of my heart, thank you for using the theme and supporting me.

But, here’s the deal.

Ultimately, Cutline is my baby. I built it from scratch, beginning with Photoshop mockups and ending with hours spent developing and refining XHTML and CSS.

I literally crafted every pixel and every bit of code in the theme. There’s not a single detail I didn’t attend to, and I could sit here and tell you every little thing there is to know about every aspect of Cutline.

And this is precisely why I am so angered — so absolutely livid — over the fact that someone would have the nerve to take my baby (which I give away for free!) and claim it as his own.

It’s like painting a mustache on the Mona Lisa and saying, “Hey, check out my masterpiece. Yup, just painted ‘er on a blank canvas, I did!”

Fortunately, at its core, the blogosphere is still very much an organic medium. Philanthropy and goodwill tend to be rewarded, and dishonesty and deceit are generally squashed (quite fervently, in some cases).

When people read things as ridiculous as this:

If you like it, let me know, for while it is not currently available for public consumption I’m toying with the idea of making it so. The feedback will determine.

They tend to take offense. And when you take it this far:

The main reason it’s not yet available is that it will require some more tweaking before it goes public. Otherwise, I know you PHP, XHTML and CSS studs/studettes out there will rip it apart. Well, maybe not. It does fully validate as transitional code, so”¦maybe I’m not as far off as I think.

You’re likely to find yourself on the “squashed” list.

Be that as it may, I refuse to let this issue slide by without comment.

To the guy who ripped me off, I’m extremely disappointed. You’ve insulted me in a way that rubs me worse than just about anything else I can imagine.

Cutline is not only a reflection of things that I’ve learned and techniques that I’ve developed over the past year, but it is also reflective of something far more personal. It’s a living, breathing piece of work that represents a choice that I made back in July of 2005 — a choice to change my life and create something better for myself.

It’s a project that wouldn’t have been possible without some courageous steps and a learning process that was both difficult and stressful at times (but always worth it).

Design, writing, problogging, and entrepreneuring — the four topics of your blog — are all rooted in character, which you should probably consider establishing if you hope to take your site any further.

Update: Owning up to a mistake counts as character in my book, and Charles has stepped up to the plate with a posted apology. Thanks!

1 If you check his stylesheet, it’s Cutline. The spacing is identical; class names remain the same; the same elements are defined; and unused code has been left intact. The XHTML is even worse. It’s egregious, really. Cleanline? Please. ↩

2 I found out about this whole thing because apparently, the guy was naÃ¯ve enough to leave a comment at the Cutline support site. Smart. ↩