When Does a Blog Become a Magazine?

While the Web is certainly a publishing destination in and of itself, I constantly find myself amazed by sites that bridge the gap between concrete and cyberspace. Specifically, I’m talking about sites like the New York Times, WIRED, MacWorld, and a host of other Web-and-print outfits.

Half of my attraction to sites like this is the fact they’re all viewed as major publications. The other half is they convey such an impressive breadth of information in a way that is both entertaining and easily-consumable for your average Internet Joe. One thing these sites have in common is they were all highly successful print outfits before they became successful Web destinations. I have a sneaking suspicion, though, that all of this is about to change…

Blogs: turning the paradigm on its head 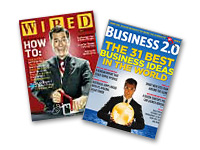 There are quite a few bloggers who are essentially running bona-fide publications, and some of them make good money doing it. In my opinion, a few of these sites have reached their tipping points, and they have become as much a part of our information pipeline as any reasonably successful magazine or newspaper.

The next logical step for some of these blogs is to foray into other types of media and to explore different avenues of monetization. One need look no further than a local bookstore to realize that printed works represent a huge opportunity for expansion. Whereas print was once viewed as the starting point for growth, I think that more than ever, it is now becoming a destination for those among us who become successful purveyors of information.

I think it will be fascinating when somebody makes the transition from blog to print, especially given that print-to-Web has been the only real “working model” to date.

If anyone is on the precipice of bridging the old media/new media gap, it’s TechCrunch. The TC network basically fills the Web development news niche (at least from the corporate/business angle), and there are no real competitors in the print space. Business 2.0 and Wired come to mind, but both of these publications have a broader focus and cannot afford to threaten their ad space with news of the next Web-based video startup that is sure to flop because monetization was never discussed in the boardroom (aka grandma’s garage in Palo Alto).

By now you probably know that TechCrunch has expanded its offerings to include a blog about all things mobile, a podcast, a “notes” blog, a job board, and strangely enough, a gadget site which exists in a marketplace more crowded than a NYC subway at 8:00 am.

I think he could do much, much more.

Why expand into print?

The value of having your brand appear in print cannot be overstated. Even now, in spite of the utter ubiquity of the Web, branding through print still allows for a deeper, more profound penetration into the public marketplace. It’s true that the costs associated with launching in print are high, but for Web sites that have already achieved a certain “superstar” status, the transition is much more of a no-brainer. Why?

Sponsorships are covered. One of the biggest challenges facing emerging magazines is acquiring stable sponsorships and filling out their ad space. This is an area where TechCrunch excels, as evidenced by the $60,000 per month worth of space that’s currently filled in the upper right corner of the site. I’m sure there are plenty of other Web companies who would love to bootstrap their name to a printed version of TechCrunch, so I think they’ve got this area covered.

Your initial offering will be well-received. With 85,000+ readers via RSS, it’s not as though “TC The Magazine” will have to hope for subscribers. I bet they’d bag 20,000 subscriptions right off the bat, and while I’m no print analyst, I certainly think those numbers would shake down in favor of TechCrunch.

You can expand into the “quality” sector. One thing that is common among all of the TechCrunch sites is that there’s not a whole lot of journalism going on. It’s mostly a stream of regurgitation, and yet it still works like a champ! A foray into the world of print allows for more in depth, more journalistic articles, and all signs indicate that this sector of the market is ready for big time print coverage. Nobody is in a better position to make that a reality than Michael Arrington.

As with most matters in business, this issue is mostly about money. Despite that, I think this is also about being able to look beyond the Web, as those of us who do business in this realm tend to shy away from things that cannot be accomplished “virtually.”

By now, I’m sure you’ve heard people make the ridiculous claim that “print is dead” because of rising costs coupled with the comparatively low cost of starting a Web site. One thing this debate needs, however, is a healthy dose of sound reasoning. Print is essentially the physical embodiment of the most powerful marketing technique there is – storytelling. People want to be told stories, and given that not much has changed in that area since the beginning of recorded history, I don’t think print is likely to go the way of the dodo anytime soon.

The one thing that will change about print is the way that publishers enter that marketplace. I talked about it earlier, but I’ll say it again here for clarity – print was once the starting point, but in the years to come, print will become the destination for those who prove their mettle on the Web.

The game isn’t changing because print is becoming too costly. Instead, the game is changing because the Web now provides the ultimate cost-effective proving ground for both ideas and fledgling publications. Finally, companies don’t have to blow a ton of money getting their printed material together in hopes that it will be well-received. Thanks to their experience on the Web, they’ll know if their material has what it takes to become successful in the print space, and the overall risk will be diminished as a result.

All in all, nothing earth-shattering is really happening here…